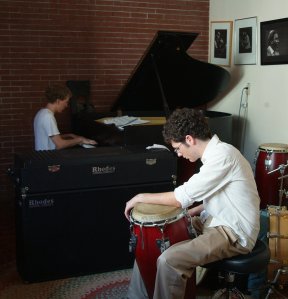 Pat and Joe spend their last hour together jamming to a Latin beat before Pat flies off to college.  Rose was hanging out with them too just listening, doodling and trying not to be thrown out of the studio by her big brothers.  I just got back from taking him to the airport to fly to Virginia.  He won’t be home again until Christmas break. That is the thing about going to college 3000 miles away. You don’t get to come home much.  There were so many things I wanted to be sure to tell him, last minute things like, separate your laundry, don’t take up smoking or drinking, wear a sweater and socks when it is cold, if you do drink  don’t drink too much, don’t forget to study, you need to study 2-3 hours for every hour of class, be sure to eat something green every day preferable a vegetable, have some fun, but not too much, if you get sick drink plenty of fluids and rest, don’t let those southern girls take advantage of you, be nice, don’t break any hearts, definitely don’t get anyone pregnant and chew with your mouth closed.  I didn’t say any of it.  We talked about the traffic, and flying and music and Coney Island.

It has been a whirlwind of a summer since graduation.  Pat has been getting himself ready to go albeit at his usual pace of work for 20-30 minutes, relax on the couch and read for an hour; work for 20-30 minutes, play piano for an hour, work for 20-30 minutes, walk downtown to eat Chinese food, work for 20-30 minutes, read on the couch and snooze a bit, get a snack, work for 20-30 minutes, watch the Daily Show on his computer, etc..  Usually the work part was preceded by a reminder from me that he has a lot to do and the summer is short.  He has had loans to apply for, roommate questionnaires to fill out, dentist, doctor with vaccinations, health forms, eye doctor, shopping for dorm stuff, shopping for clothes.  He especially needed shoes and socks, since he has been wearing only Birkenstocks for the last few years.  As I watched him try on some new shoes, I took a look at his latest pair of Birkenstocks and noticed that they have holes right through the soles!  We also filled out his wardrobe with enough to wear for 3 weeks without doing laundry.  It took him all summer to clean out his bedroom of 10 years of collected stuff (I stopped cleaning his room when he was about 8) We told him we were going to bulldoze whatever he left behind, he stayed up late last night with some giant trash bags and storage boxes to finish the job.
Pat has been in a strange space all summer.  It must be that transition from high school to college.  I can’t remember much about what that summer was like for me other than the couple of trips I went on.  I don’t remember doing any of the work to get ready to go, although I am sure I did it, my mother had six younger kids to take care of and little time to help with that.  I don’t remember much about how I was feeling either.  Pat seemed to just want to relax and not do much.  He didn’t get together with friends as much as I thought he might, and he didn’t build his boat he talked about at the beginning of the summer.  He did lots of driving and errands for me, since I’ve been in school most of the time. He would get in the car and drive somewhere at the smallest suggestion that we needed something.  He seemed to enjoy the freedom that having his drivers license gives him and we just let him go.  We tried to give him lots of freedom this summer.  We wanted to see how responsible he is without many restrictions.  (this was hard for Rose to watch, she thought we were letting him get away with too much)  He did fine though,  he stayed out or stayed up way later that I would have wanted him to, but mostly he   behaved.    I was usually up late studying when he would get home and he would come sit by me and talk a little bit.  Or some nights we would stay up late together watching West Wing episodes from Netflix.  He would usually have to explain the government stuff to me, I enjoyed those evenings together.  I am going to miss him, we are all going to miss him.  Our family is moving into a new phase now, we’ll get used to just four around the dinner table, and without the scholarly wisecracks during our dinner conversation.  But just to keep myself from getting too melancholy I made a list of the things I won’t miss.
1. finding the greasy griddle on the stove in the morning from his nighttime snacks
2. having the couch covered with his backpack, jacket, several half open books.
3. finding piano music scattered all over the floor around the piano.
4. worrying about his grades when the progress reports would look grim but he would always bring home mostly A’s for final grades.
5. finding my teapot empty because he drank the last of the tea and didn’t brew another pot.
6. having to turn off some noisy music he put on the stereo but didn’t stay around to listen to.
There, I feel better, now I think I’ll go watch some episodes of West Wing before I go to bed….
Happy knitting! and drop me a line sometime
Advertisement

This site uses Akismet to reduce spam. Learn how your comment data is processed.

BE THE CHANGE YOU WISH TO SEE IN THE WORLD